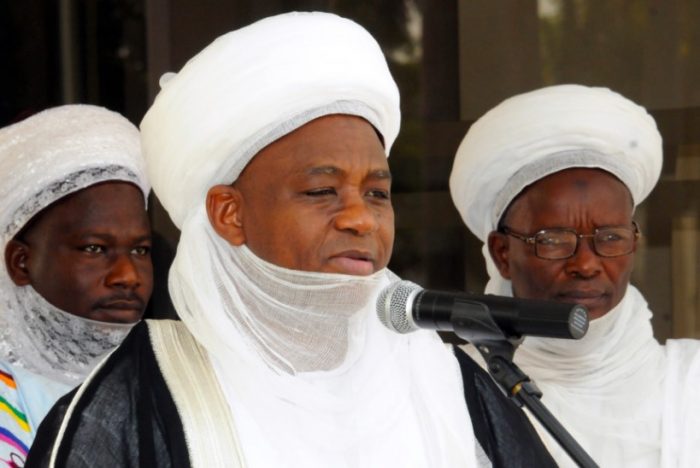 The Sultan of Sokoto is the father of the Fulani people, the foremost traditional ruler in northern Nigeria and the spiritual leader of all northern Muslims.
He is not just a traditional ruler but an all-powerful potentate who represents a strange and mystical power and who heads an ancient and dark empire.
Not only is he revered by his subjects but he is also regarded and treated by some as something akin to a deity and by others as nothing less than the reincarnation of Sheik Usman Dan Fodio, the Sufi Muslim who founded the Caliphate empire by conquering and utterly crushing the Hausa kingdoms in a brutal and bloody jihad in northern Nigeria in 1804.
Whichever way his subjects choose to view him, whether as a deity or an all-conquering and all powerful jihadi war-lord, to the Muslims of the core north his word is law and absolutely everything revolves around him.
He is the living symbol of Fulani power, strength and glory and the physical manifestation of the quest for Islamist domination.
Yet despite these lofty heights and undoubtedly rich and impressive heritage his people have slaughtered, subjugated and terrorised more Nigerians in the last 212 years since Usman Dan Fodio’s 1804 Jihad than ANY other ethnic group in our nation.
They have butchered more of their fellow Nigerians in that space of time than the white Boer settlers and farmers of apartheid South Africa butchered the black African population in Southern Africa in 363 years of white rule and domination since the time that the Dutch coloniser and administrator, Jan Van Riebeek, first put his foot on the South African Cape in 1653.
No African ethnic group has killed as many of their fellow Africans as the Fulani of northern Nigeria. Not even the Hutus of Rwanda, who did a whole lot of killing in the genocide of the early 1990’s, could match them.
From the first Mahdi, Usman Dan Fodio, to the second, Sir Ahmadu Bello and to the third, General Muhammadu Buhari, the trail of blood, carnage, terror and religious compulsion and the inexplicable quest and insatiable desire to dominate, conquer, subjugate and control others trails them.
This is as unacceptable as it is provocative. The truth is that there is no place in any civilised society for any form of compulsion or ethnic and religious domination and bigotry
I say this because I believe that the mark of civilisation is the ability to tolerate dissenting views and to accomodate those that do not share your faith or come from your tribe, ethnic stock or nationality.
If you are incapable of being tolerant of others simply because they are different or they come from a different place and if you cannot indulge in any form of accomodation of those that do not share your views, your faith or your bloodlines then you are nothing more than an uncivilised field hand and an intellectual barbarian.
If you are capable of both tolerance and accommodation of others, no matter how strange or absurd their views, their faith or their circumstances may be, then you are the epitome of civilisation, decency, good breeding and good old fashioned class.
The morale of the tale is as follows: to be tolerant and kind to ALL those that see things differently from you, to stand up against the intolerant and to resist the ignorant, the bigoted, the racist, the ethnic supremacist and the religious extremist. .
It is in an attempt to keep faith with this sacred resolution and honor this fundamental principle that I wish to bare my mind and share my views about the way forward for the Fulani Republic of Nigeria in this contribution. Those views are as follows.
I am a nationalist. I believe in the rise and power of the nation state. I believe in the sovereignty of the will of the people. I believe in the right of independence and self-determination for all and sundry. This is especially so for the numerous ethnic nationalities that make up the space called Nigeria.
I believe in the right of the Igbo to have Biafra and the right of the Yoruba to have Oduduwa if that is their wish.
I believe that that right ought to be extended to the Ijaws and indeed to every other ethnic nationality in the country if that is what they want.
I believe that to compel a man or a people, by the force of arms and with the raw power of the state, to stay in a house or a space that they do not wish to stay is evil.
Such a state of affairs and situation is an eloquent testimony, graphic example and accurate illustration of subjugation and bondage.

Coronavirus situation delicate, disease may reach all countries – WHO warns

Guinea set to vote on new constitution after months of unrest